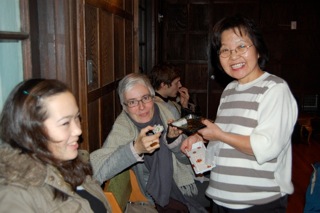 Thursday night’s UTS Speakers’ Forum featured a class on how to make sushi at home, by Mrs. Reiko Mickler, long time head cook at the Unification Theological Seminary at Barrytown. The Forum was well attended by Red Hook and Barrytown residents who thoroughly enjoyed the class, and the sushi samples Mrs. Mickler made.

To begin, Mrs. Mickler explained that sushi is not raw fish, as many believe. Sushi, in fact, is rice made with sweet vinegar, with a variety of vegetables, seafood, meat, etc. added to it. Raw fish is commonly called sashimi in Japan.

She explained, that when she was growing up in Niigata, in rural northern Japan—famous for it’s delicious rice—her mother often made sushi, but it was not rolled with seaweed sheets, but served in a bowl. It wasn’t until she came to America as an adult, that she discovered the many types of rolled sushi, such as the popular California roll, which were invented in the U.S.

Mrs. Mickler demonstrated how to make two varieties of sushi last night. The first was Futomaki, or “fat” sushi, as she called it, because the roll is stuffed with a lot of ingredients, including crab meat, sliced egg omelette, and sliced cucumbers and carrots.

The second sushi roll Mrs. Mickler made was the famous California roll. This one is usually made with avocado, and is rolled in such a way that the seaweed sheet is buried in the middle of the roll, and the outside is rice.

Everyone enjoyed her demonstration, as well as the sushi and green tea served by her friend, Mrs. Katsuko Christopher.

To end the class, Mrs. Mickler encouraged everyone to go home and try sushi making themselves. But she also added, that she is available to put together sushi platters for dinners or parties, if given a couple of days advance notice. Her phone number is 845-264-2762.