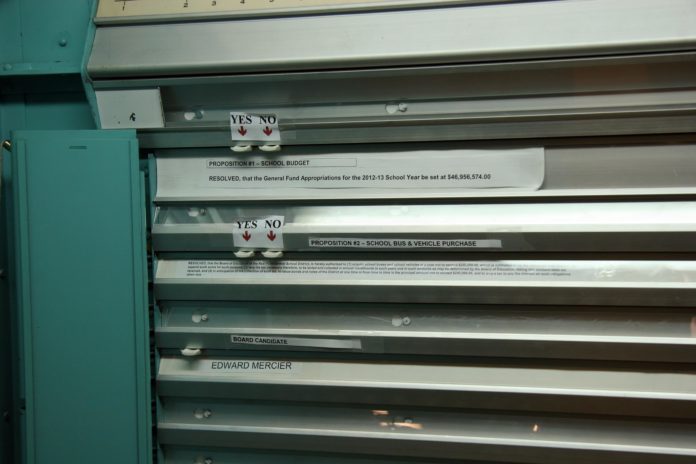 An increase in state aid and further belt-tightening by the Red Hook school district to keep the school budget under the state tax cap appears to have paid off with huge support from voters May 15.

The bus and vehicle replacement proposition also passed by a wide margin, 990-538. Last year’s bus referendum passed by a narrow margin with many fewer votes cast due to poor visibility on the machine ballot. This year’s proposition was clearly marked and actually received more votes than the budget.

Among those on hand at Mill Road Elementary for the vote count were most of the current school board trustees along with board candidate Ed Mercier and Superintendent Paul Finch. To pass the time as the votes were tallied, a number of onlookers joked good-naturedly with Mercier about his “tough campaign” and possible write-in candidates. Mercier ran unopposed.

The wide margin of passage for the budget took many off guard.

“I was a little afraid that people would not come out to vote because there weren’t that many items to vote on and because it is a relatively small [tax] increase,” said School Board President Kelly Mosher. “Very pleasantly surprised at the better than 2-to-1 passage.”

The voter support was also welcome news to the superintendent.

“It’s an affirmation of what we do here in Red Hook,” said Finch. “I think people recognize that we worked hard to keep the budget under the cap and rewarded the district for it.”

The 2012-2013 budget comes in under the state’s new tax cap mandate calculated as 2.53 percent. The budget totals $46,956,574, an overall increase of 2.27 percent over the prior year. Approximately 63 percent of that is funded through local property taxes.

According to a district mailing, the increase will translate to an additional $5.75 a month on the school property tax bill for families with property assessed at $200,000 — for a total of about $69/year.

Mercier, a financial planner, received 1,007 votes in his unopposed run to replace the retiring Sean McLaughlin on the school board.

“I sincerely look forward to the opportunity to serve the community on this board, and to work alongside such great people who are completely committed to the work that they do,” said Mercier. “It will be impossible to completely fill Sean’s shoes, but I will do my best and am ready to face any challenges that lie ahead.”

Mercier joins Ryan McCann and Dawn Morrison, who were voted in last year, along with Johanna Moore and Mosher.

Staff - February 28, 2021
Arrests and charges stemming from New York State Police activity during the 24 hours ending at 7am.