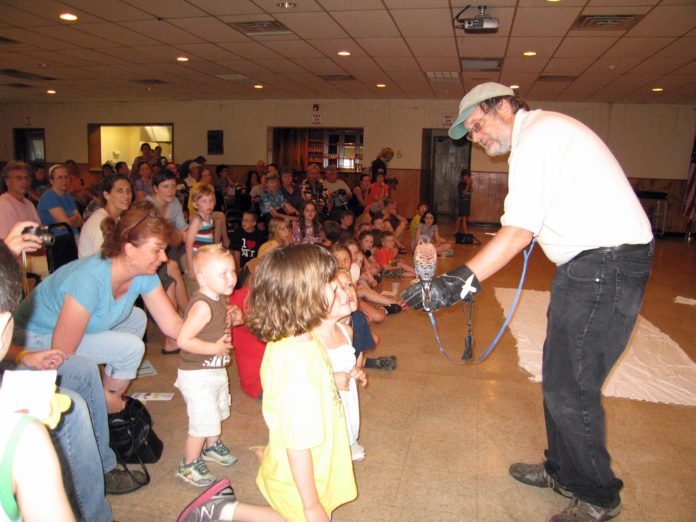 A handful of children were grouped around tables coloring pictures of owls, as their parents and Red Hook Library Director Erica Freudenberger encouraged their creativity. Within 20 minutes, however, all 100 chairs in the Red Hook Firehouse room were filled, and all eyes were on the man placing mysterious boxes on the front table.

It was Friday evening, July 6, and the library’s “Dream Big” summer reading program was about to kick off with a flourish: Scott Heth had brought some feathered friends from the Sharon Audubon Center, a Connecticut wildlife sanctuary run by the National Audubon Society.

The pictures of owls were immediately forgotten as Heth introduced his “Birds of Prey.” First up was a beautiful, tiny red morph Eastern Screech owl named Blaze. She peered with apparent curiosity at the crowd while safely tethered to Heth’s gloved wrist.

The crowd of youngsters who had been encouraged to sit on the floor at the front were immediately quizzed.

“What do we humans have that birds do not have?” Heth asked them.

After a few guesses, the entire audience seemed stumped.

“Bladders,” Heth explained with amusement, pointing out the large white sheet he had placed on the floor to catch possible droppings.

There was more surprise when no one could accurately guess the weight of Sophie, the large, grey Barred owl Heth presented next. She weighed approximately 3.5 pounds.

Heth then walked through the audience with Bob, a petite American kestral, to give everyone a good, up-close look. Bob, like Sophie, had been rescued from people who thought they would make great pets, Heth explained. Sadly, they now remain in the Audubon sanctuary and would not be released into the wild because they had not developed any sense of who their predators were.

Mandy, a red-tailed hawk, was the largest and last of the birds Heth presented; she had a majestic wingspan but was missing one eye.

After the demonstration, a number of people wanted to speak to Heth or ask more questions. Thomas Langan, age 7, of Red Hook told him, “I once saw a Great Horned owl on a telephone pole near my house.”

Freudenberger noted of the evening, “We love to start our summer reading program off with a great event. It helps build excitement. This year’s theme is ‘Dream Big’, so we’re focusing on following our dreams and shining a light on things that go bump — or in this case, hoot — in the night.”

The library’s “Dream Big” summer reading program offers a wide variety of activities for age 2 through 9th graders. While the emphasis is on reading, there will be music, art, crafts, games, babysitting classes, the Upcycling Jewelry Workshop, the Battle of the Books, and even a campout at the Firehouse on August 10. The “Dream Big” brochure can be downloaded from www.redhooklibrary.org for details and schedules of events. For more information, contact the Red Hook Public Library: redhookpr@gmail.com or 845-758-3241. For information about the Audubon Sharon Center: www.sharon.audubon.org or e-mail sheth@audubon.org.