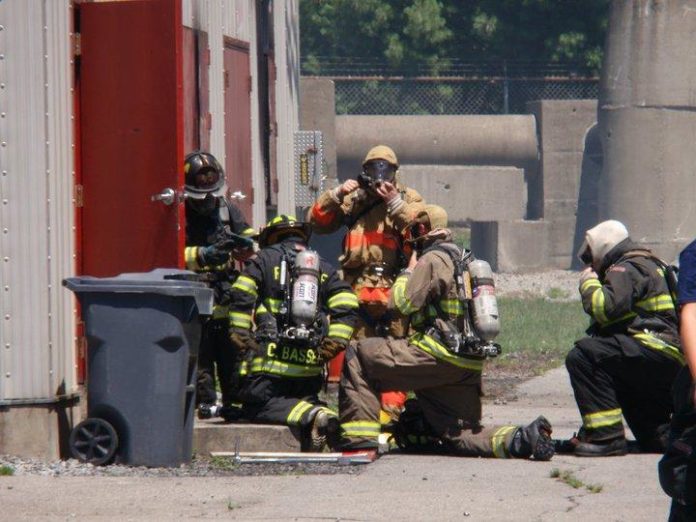 Rhinecliff may be a small community but its tremendous spirit is personified in its Fire Company and Rescue Squad.

Serving the community of 425 residents (according to the 2010 Census) is a point of pride with the all-volunteer group, which is always looking for new members. Just listen to their testimony.

Cynthia Baer, the former president of the Fire and Rescue group, first got interested when she organized “Celebrate Rhinecliff Day” in 1997 and worked with the Fire Company to pull it off. “I ended up joining after that,” she said.

So why should other people? “Camaraderie arises from working together so closely, especially in the dangerous situations,” she said. “It also gives a lot of confidence, to be able to be self-sufficient and of help to people because of the skills learned here… for free!”

Cynthia’s husband, Joe, is the current president. “I run the business end of the company so everyone else can concentrate on what they do best. These men have taken the training to run into burning buildings to save lives,” he said.

Classes are scheduled once a month, and extra drills and training are provided by Dutchess County Emergency Response.

Tim Conklin is captain of the Rescue Squad. He’s been with the company since 1997 and is a third- generation member: “My grandmother was a member of the Ladies’ Auxiliary. It’s a good, sound career and gives you good experience for the future,” he said, adding, “You go through some things together – good and bad – that result in lifelong friendships.”

Current membership in the organization is approximately 100, with about 25 active participants. Rhinecliff residency is not a requirement. “Membership really doesn’t take much time, a few hours a week total,” Conklin noted.

Rich Kipp, chief of the Fire Company, put it this way: “We save taxpayers a lot of money. Your taxes only pay for operational expenses. I enjoy doing this. It’s nice to give back to the community.”

Elizabeth Rovere is a new member who joined as a result of benefiting from an emergency response herself. “It has been something of a challenge for me as an older woman, but I really like doing this, and I want to stay with it as long as I can,” she said. “I would like to see more women join, and we really have to show the young people what the fire company does. It’s something to be proud of.”

Craig Bassett just got promoted to Captain. He joined five years ago at the age of 16 as a Junior Firefighter, and he is now able to work alongside his dad, Gary, the Second Assistant Chief.

“I always wanted to do this. I got a lot of my friends to join, too. It’s a good way to meet people, there are free classes, and it helps the community,” he said.

Vice President Susan Silverman became a member because of what Rhinecliff Fire and Rescue did for her brother. “He was very ill, and there were many times he needed emergency transport to the hospital, often in the middle of the night. They didn’t care how often we called. I didn’t have the money that could sufficiently repay them for their kind service, so I give my time,” she said.

You can get to meet the Volunteer Fire Company and Rescue Squad on Sat., Sept. 15 at their Fourth Annual Field Day and Chili Cook-Off from 3-7pm at Firemen’s Field on Valley Way Road. (Rain date Sun. Sept. 16). And on Sat., Oct. 13, they’re holding an Open House at the firehouse on Orchard and Shatzell Streets from 9am to 1pm.