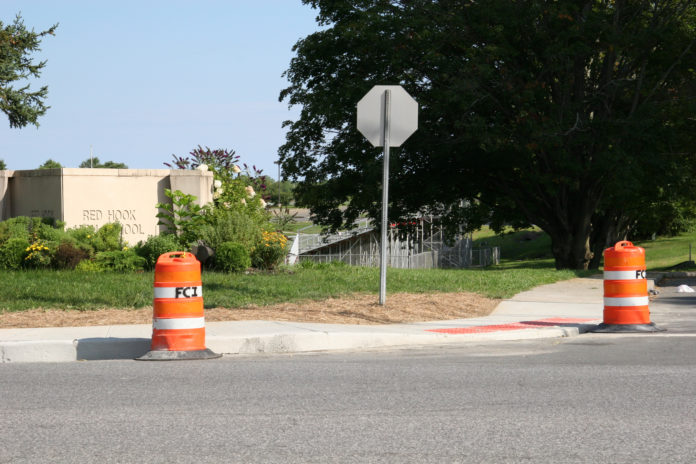 Those traveling through the Village of Red Hook have probably noticed the many sidewalk improvement projects underway.

The West Market Street project is almost complete and is funded by a grant from the Federal Highway Administration (FHWA) that is administered through the state Department of Transportation. West Market Street is designated part of the FHWA’s “Safe Routes to School” program, so increasing walk-ability near the school is a priority.

Deputy Mayor Brent Kovalchik expressed thanks to “all the village residents, especially those with homes on West Market Street, for their patience during this construction project. They’ve had to relocate their parking to allow for the new sidewalk to come in.”

Under the same grant, new ADA-compliant crosswalks and paver replacements are also planned on Route 9/South Broadway in front of Village Hall and the library.

Meanwhile, a federal community development block grant will pay for sidewalk completion on Park Avenue, picking up where a previous grant ran out.

“Park Avenue is one of our wider, more modern streets,” explained Mayor Ed Blundell. “But if you ride your bike or walk on it, cars tend to zip past you.”

“[We] want to build a network [of sidewalks],” he continued. “We’re trying to connect them all as the money comes in.”

The grant will also cover a sidewalk to be installed on Firehouse Lane, and a new ADA-compliant crosswalk on Route 9 at Red Hook Commons.

If there is money left over, village officials hope to replace uneven pavers starting from the Four Corners intersection and working out, as far as the money will go. These projects are not expected to last longer than three to four weeks.