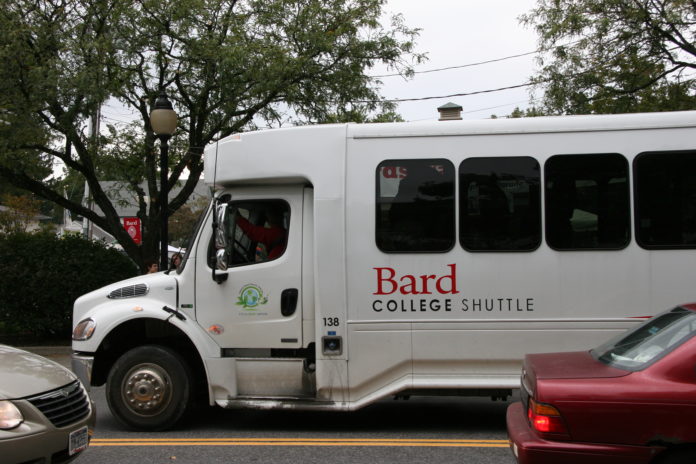 After a series of negotiations with Tivoli village officials that began last fall, Bard College has altered its student shuttle schedule to cease general service to the village at midnight. Late-night service, available on weekends till 3am will now be accessible only to students living in the village.

Additionally, both the shuttle stop and Dutchess County loop bus stop will be moved north to Pine Street from its prior location in front of the post office.

Changes to the shuttle schedule were put in place beginning Sept. 1, but the plan has undergone several revisions since that time. Initially, late-night service was discontinued entirely to both Tivoli and Red Hook. However, after a large and negative student outcry, the Bard administration just reinstated late-night service till 3am to Red Hook and resident-only service to Tivoli.

Students living in Tivoli will now be required to register and carry a special off-campus ID in order to use the shuttle. They will also need to sign an agreement that outlines acceptable conduct on the shuttle.

Tivoli originally initiated talks with Bard in response to a steadily increasing number of noise complaints and code violations reported by local residents in and around the business district. Noise complaints have focused on music emanating both from the Black Swan pub and from residences housing Bard students, as well as on groups of pedestrians walking along Broadway and Montgomery Street late at night. The Village of Tivoli has an ordinance that limits excessive noise after 10pm.

At the Sept. 19 Village Board of Trustee meeting, Tivoli Mayor Bryan Cranna hailed the original decision to end late-night service entirely as a positive development for village residents. “The residents that are in this room and some of the other residents have been more than patient over the last few years that this issue has been growing,” he said.

He added, “I have gotten many phone calls from residents in the middle of the night saying that people were getting off that shuttle and they were loud, there was vomiting, there was urinating in people’s yards. That is just unacceptable.”

However, he was less optimistic about the reinstatement of the resident-only late-night shuttle. In a statement to The Observer on Sept. 28, he said, “I agree that Bard College students that call Tivoli home should have access to and from the campus for classes, library, events, and other reasons. However, running this shuttle until 3am is in no way acceptable, and I’ve yet to hear any legitimate reason as to why a college shuttle should be running hours after the college has closed.”

Village Trustee Joel Griffith noted that Bard College Head of Transportation Jeff Smith estimated the number of students taking the shuttle into Tivoli reached as high as 400-500 on certain nights.

According to the Bard website, 74 percent of the 1,982 enrolled undergraduate students live in college-owned housing. Smith’s estimates mean nearly a quarter of Bard students made use of the shuttle over the course of a weekend night, Griffith said. “It just became unsustainable. It’s intolerable and it’s unsustainable, and it could not go on any longer,” he added.

Griffith also pointed out other consequences of limiting shuttle service. “Taking away some of the hours of the shuttle does create a new set of challenges for the village and for Bard. Of course, for the students, how are they going to drink and get home safely?” he asked. “I hope that Tivoli and Bard are going to be able to work together to absorb that.”

The students, he said, should “plan ahead, call a cab, designate a driver, stay over, be smart and be careful. But this luxury of the bus to get you home safely was really tearing at this village and we had to do something about it.”

Bard’s Head of Security Ken Cooper appears to agree. “The attitude, which is extremely immature, is, ‘Well if you don’t give me a shuttle, we’re going to drive drunk’ – it’s infantile,” he told The Free Press, the Bard student newspaper. “People are going to have to make certain decisions. If they start making the wrong ones, they could lose a lot.”

Captain John Watterson of the Dutchess County Sheriff’s Office, who was at the Sept. 19 village meeting, said of the shuttle, “I’m sure the purpose is to discourage people from driving drunk and that’s great. I’m glad that they are trying to save people from that.”

He also noted that the complaints he heard from residents are similar to those that his office receives from other colleges in the county, and he suggested that an increase in police presence may be beneficial for Tivoli on certain nights.

He agreed to sit down with the mayor and village board to determine a patrol schedule that would involve multiple units, including officers stationed on foot to discourage unlawful behavior in public.

The change in shuttle services has not gone over well with the College’s student body. The original suspension of service triggered a student government forum at which students raised strong objections to members of the administration. Many of the student arguments centered on the increased risk drunk driving incidents, while other speakers decried the lack of student involvement in the decision-making process.

Administrators at the forum emphasized that the shuttle’s main mission is to take students to and from classes and that it was never designed to be a convoy for drunk students.

Bard’s Director of Student Activities Julie Silverstein framed the conversation in terms of student safety. “If the driver is being distracted, if people are running out in front of the shuttle to wave it down, those are not safe behaviors. If we were seeing safe behaviors on the shuttle, we would not be here,” she said.

Cranna told The Observer he had met with many students on the first day of classes this semester and is coordinating with Bard’s Dean of Off-Campus Housing Gretchen Perry to set up regular meetings at which students and Tivoli officials can discuss their concerns.