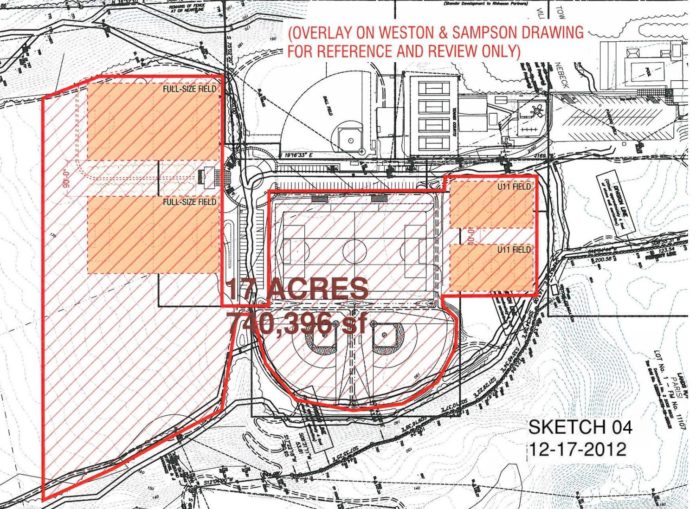 About 75 people turned out for a public hearing in Rhinebeck last month to overwhelmingly support the expansion plans for the Thompson-Mazzarella Park.

The issue has been complicated by variations between the master plan and site plan for the project, the existence of agricultural and archeological lands within the park, and the concerns of many parents who want more space for sports.

The town planning board meeting at Rhinebeck Town Hall Dec. 17 heard presentations by park committee members followed by comments from parents, coaches and two attorneys retained by some residents.

Parent and soccer coach Linda Murray presented an online and written petition with a total of 250 signatures requesting that the planners and the park committee expand the current plan, which currently includes only two additional baseball fields and one soccer field.

“We had to trim down the project” because of areas of archeological value, said park committee chair Bob Ellsworth.

“What we wanted to do was develop a park, not a sports complex,” he added, “but a park that would be able to be used by the whole community, and we feel that that’s what we’ve done…. We’ve come up with a park that everyone, young and old, can enjoy, not just a specific group.”

“We did listen,” said committee member Sally Mazzarella. “We heard from the community on how important and necessary it was to add new recreational opportunities, especially the soccer. So one new thing is the addition of a great lawn on an area that has been identified for archeology… to bring in fill, and then grade it, seed it, so that way it could be used for activities like Frisbee, flying kites, soccer, for the community in general… and we thought this was a way to accommodate it without having a negative impact on the archeology.”

Architect Frank Mazzarella, the son of Sally Mazzarella, presented a design for the field house with an impluvium to recycle water and a terrace overlook. Ted Fink, an urban planner with GreenPlan who consulted on the comprehensive plan, reported on a traffic impact analysis that recommended reducing speed from 45mph to 30mph for the 750 feet just west of the new park entrance on Route 308, and a fiscal impact analysis that estimated yearly maintenance costs at $14,000 to $30,000, which would mean $2 to $4 per town resident.

Engineer Robert Murray, who is a parent of soccer players and the brother-in-law of Linda Murray, presented a design with four extra playing fields. “This shows how much space there really is and what we can do with it,” he said.

“In addition to this great opportunity for recreation,” said Linda Murray, “I also see this vital piece of property as a center for people to come together, and commerce to be generated for businesses in town, because naturally when people come together they will come into town…. I see it as a great fundraising opportunity for these fields to develop and to sustain the park.”

Lou Kantaros, who formed the lacrosse league three years ago, said the league has grown from one team of 30 registered players to three teams of 75 players this season. “I only see our needs increasing over the next few years,” he added.

“The demand for soccer fields has gotten a lot bigger,” said soccer coach Gavin Curran, adding that the number of players has increased, from 233 in 2006-07 to 277 in 2012. He also pointed out that 11 athletic groups all use the same four fields scattered around the town, only one of which the town owns.

‘Today we have a national obesity epidemic,” noted soccer parent Tara Sullivan. “I want [my kids] out of trouble, I want them playing with friends, and these fields will give them that opportunity.”

Taking the opposing viewpoint to emphasize the conservation of wetlands and open space instead, Marie Farrell, a parent, asked, “How many wetlands do we have in Rhinebeck, as opposed to playing grounds?”

Farrell also commented on how much safer it is for kids to walk to the park in the village, as opposed to walking along Route 308 to loaner fields at the Baptist Home.

Kerri Karvetski, recreation director for the Rhinebeck Soccer League and also a parent, urged the board to consider Rhinebeck’s future as a town “from an economic development standpoint…I would think that we would want to provide as many opportunities for young families to feel like they would want to move here,” she said.

In response to the concerns and comments, planning board chair Mike Trimble noted that the board is not a legislative body for the issue.

“The planning board is constrained by the zoning law,” he said. “We can review the proposals brought before us, and we can either approve or disapprove of them, but the town board is the one who can change the application, if they choose to do so. The park committee has worked very hard on this project for a number of years and the role of the planning board is not to evaluate if there are enough fields.”

He added that a joint village board-planning board meeting is in the works for sometime in January.