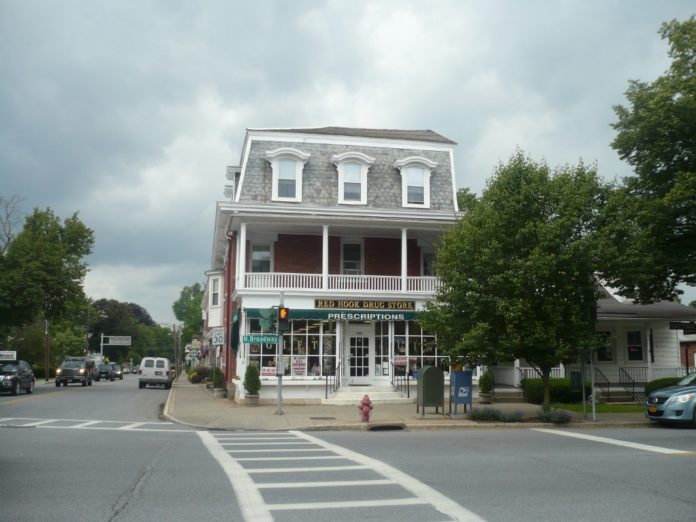 Red Hook village officials intend to create a 15-minute parking spot right in front of the Nekos Pharmacy entrance near the corner of Route 9.

At their June 3 meeting, village board members said they plan to draft a change to village code, hold a public hearing and then vote on the idea.

The board has already dispatched a letter to the state Department of Transportation in order to get the permitting process started. Initial talks with DOT indicated that the village wouldn’t need more signage, just a change from the existing two-hour parking sign to a 15-minute one, according to Mayor Ed Blundell.

The idea for the 15-minute parking spot, the first in the village, came from Peter Nekos, owner of Nekos Pharmacy.

Peter’s wife, Nadine, told The Observer recently, “We have a lot of elderly customers who come in and say, ‘We’d love to patronize your store but we can’t do it because the parking is horrendous.’”

She said that her husband had decided in May to ask for parking meters, a 15-minute sign, pharmacy-only parking, or “whatever the village would do to work with us because it’s really hurting us with the elderly. And most of our clientele is elderly.”

Nekos said that the couple knew parking would be an issue when they opened 12 years ago, but they hoped that with several two-hour parking spots right in front of the store, access wouldn’t be an issue for customers.

Instead, she said, “that’s not the way it is. People park there and they park all day. Business people park there, which they shouldn’t do.” She said that sometimes elderly people will call from down the street to have their prescriptions brought to them because they can’t get closer parking. Others use the pharmacy’s home-delivery system, which is available on Tuesdays and Thursdays.

According to Blundell, the 15-minute space would not just be for pharmacy traffic, but for any customers doing very short-term business in the village. “You can run across the street and pick up a cup of coffee at J&J’s or run to Sipperly’s,” he said.

However, he joked, “You’re not going to park for 15 minutes and get a tattoo.”

Blundell agreed that the spot would be ideal for those who are “elderly, handicapped, or ill” and for whom distant parking from the pharmacy is a real problem.

Trustee Jay Trapp pointed out that parking is sometimes more of an issue for corner businesses. “If you look at a business in the middle of a block, you can park 50 feet in either direction from that business and not be very far away,” he said. “If you’re a corner business, the parking is pulled back from the corner and your parking may not start in front of your business.”

Trapp also pointed out that a 15-minute space is ideal in front of a pharmacy, where quick pickup is a large part of the business. “It’s well-suited to that kind of function,” he said.

Trustee Steve Zacharzuk suggested that the village should also consider a similar spot near the post office. But Blundell said that at this time only one spot is being considered..

Blundell noted that a recent crackdown on enforcing the two-hour parking limits on most streets in the village had revealed that some of the spaces are used by business owners, which he termed “counter-intuitive and counter-productive.”

During the public comment period at the meeting, resident George Beekman warned that the northern approach to the light at the Route 9-Route 199 intersection is “the worst of the four.” He also expressed concern about the elderly getting out of their cars in heavy traffic.

Finally, he suggested making the 15-minute rule applicable only in the daytime in order to maximize parking for evening activities downtown, which would typically last longer.

He also said he was worried that many people would park and not realize the time limit had changed. “It’s going to catch a lot of people by surprise,” he said.