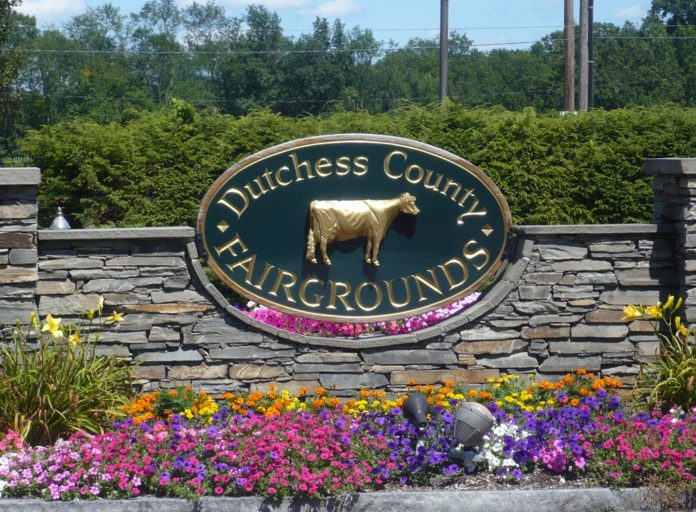 Details of the proposed new fairgrounds zoning district in Rhinebeck and a proposed village events code drew 35 concerned residents and members of village committees to a public workshop at Rhinebeck Village Hall July 30.

The new “Fairground District” was outlined in a six-page draft ordinance that represents an unprecedented cooperative effort between the Dutchess County Agricultural Society, which owns the fairgrounds, and the village.

In explaining the new district, Mayor Jim Reardon reminded attendees that when the village’s zoning code was first written in the 1960s, the fairgrounds was deemed a non-conforming use in a residential zone.

“When you’re a non-conforming use…basically you are handcuffed as far as how you can operate. You cannot expand…you can’t build, you can’t add events, you can’t do anything other than what you were doing when that zoning law was written,” he said.

Over the years, the fairgrounds expanded illegally under the current zoning law, except that the law was not enforced, he added. So the new zoning district, he said, will make such expansion legal and also allow the DCAS to maintain its facility to continue to be successful. “We are not trying to restrict their activity,” he added.

Neil Wilson, a planning consultant for DCAS, then explained the boundaries of the proposed new district.: The existing fairgrounds would be the “as-built” site plan, also referred to as a “parent parcel.”

Wilson said the “parent parcel” concept would help when considering the fairgrounds as a whole, since it is comprised of several small parcels along Mulberry Street and Platt Avenue, in addition to the main complex. Future additions and changes would then be considered in light of the existing site plan and would be subject to the normal review process by the village planning board, he added.

The new ordinance outlines area and bulk regulations like setbacks, minimum lot width and maximum building height, as well as signage rules within the fairground, permitted uses of fairground property and other regulations.

Steve Rosenberg, who lives on Platt Avenue, suggested that the new law require a public hearing for new construction proposed within the fairgrounds, especially if it came close to the buffer area on the fairgrounds’ perimeter.

However, Richard Cantor, the attorney representing DCAS, said such a requirement would be inappropriate. “The existing provision in the village law that gives the planning board discretion to hold a public hearing on a site plan application is sufficient to cover the issue,” he said.

Planning board chair David Miller said that the board would discuss the idea of a special permitting process but he felt that fairgrounds improvements should be permitted uses.

“A lot of [times], we have a public hearing, nobody shows,” he said. “It’s a lot of trouble and we don’t need to do that all the time. Having [the fairgrounds] be a permitted use is a good thing, [the planning board] will still have discretion to hold a public hearing if we think it’s a significant project.”

John Vericchio, another village resident, asked whether the new ordinance applies to the portion of the fairgrounds property that is considered part of the town, a 36-acre parcel at the north end of the main complex.

The village board confirmed that the ordinance would not cover that portion. And Vericchio then suggested that the town, village, and DCAS “tie up all loose ends for what is [expected] so as not to have any problems in the future when the fair tries to do some activities [on the town portion of the fairgrounds].”

Reardon then opened the discussion of the events code, which has been proposed by the village board as an application process for future events to help village officials plan adequate crowd control and emergency plans.

Interest in a new law was triggered, Reardon explained, by three events in 2010. One was Chelsea Clinton’s wedding, which took place in the Town of Rhinebeck but impacted the village because of the huge crowds and wedding-related activities. Reardon said the village received little information about the wedding until he pressed Secret Service agents for information.

Also Northern Dutchess Hospital held its annual “Taste of Rhinebeck” event, which Reardon said was “a great event that I fully support.” But he added, “ one of the vendors put a pig roaster on a village sidewalk. It was inappropriate, it doesn’t belong there. It’s a safety issue.”

And then the fairgrounds held a fireworks display for three nights in a row around July 4, which the mayor said upset residents. “We had no knowledge of this.

The letter we got [before the event] said there would be fireworks July 4. It turned into three nights,” Reardon said.

The mayor added, “The whole idea here is not to stop people from having events. If you want to have an event, just let us know what you are doing, so that if we have to have police coverage or make an emergency plan [we can].”

However, Cantor said the draft event code does more than just request information and he asked whether the fairgrounds is included in the code.

“This draft is doing far more than just [saying] ‘tell us what you’re doing.’ It has approval or denial authority,” he said. “If you’re adopting a code that, on its face, gives you the power to say, ‘We deny you permission to hold the fair,’ then we have a significant issue between the fairgrounds and the village.”

In reply, Reardon first said flatly, “We have no intention of telling them they can’t have the Dutchess County Fair. That would be a disaster for this community…This event code is not designed to stop the fairgrounds.”

But then he added, “Everybody in this community has to play on an equal playing field…If [the fairgrounds] is going to stage an event, you have to talk to us and let us know what it is. If it’s not appropriate and this thing cannot be staged properly, we should have the right to deny it, so it doesn’t negatively impact the residents of this community.”

Trustee Howie Traudt questioned whether the definition of “event” in the proposed code was specific enough to make clear the intent of the code. It reads: “a non-routine activity within the village that brings together an assemblage or gathering of a group of people.”

Would that include, he asked, a book signing or art exhibition. Officials and committee members did not have a ready answer.

Reardon said that the village board and DCAS would take the comments that had been submitted on the new fairgrounds district and work on a final draft of the ordinance, then set a public hearing on it in the near future.

He gave no indication of future steps for the events code.