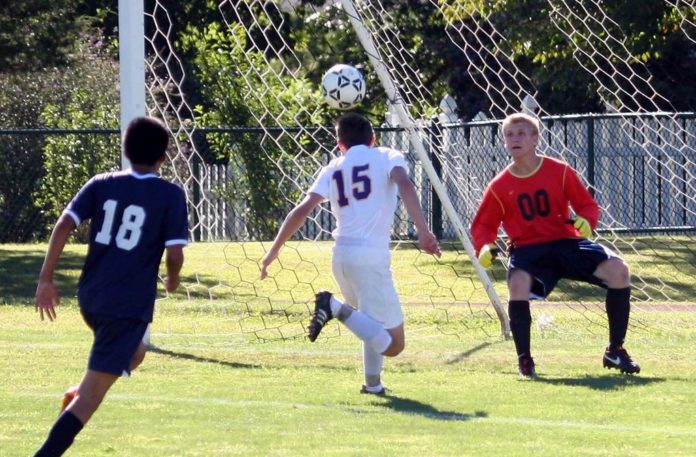 By Quinn O’Callaghan and Garrin Marchetti

The Rhinebeck Hawks had no trouble dealing with the Pine Plains Bombers at their opening soccer match in the Andy Bennett multi-sport tournament in Rhinebeck Sept. 6, beating them 7-0. In fact, had they had any less trouble, they would have mercy-ruled the Bombers.

The drubbing actually started slowly. Well, slowly for a seriously offense-minded Rhinebeck squad. Rhinebeck’s Seth McClenahan and Ian Katomski both whiffed on shots in the first two minutes, but Brandt Slayton connected with McClenahan for a breezy 15-foot goal to break the scoring seal. The Hawks had a pair of scoring opportunities in the 37th minute on a pair of missed headers. Blown chances would be the cornerstone of the first half; by the time McClenahan buried his next attempt at 23:39, a lefty shot from the side, Rhinebeck had missed on five decent shots.

But they more than made up for it. Rhinebeck’s Mike Flanagan scored off a deflected shot in the 21st minute, and, after a slew of missed scoring opportunities – including a pair of shots that when off the crossbar – McClenahan scored on a worm-burner that went through the Pine Plains goalkeeper’s legs in the final minutes of the half, sealing a hat trick.

The Bombers, through the first half, had no way of getting by a heavy Rhinebeck defensive midfield, and failed to post any serious shots on goal. The team also seemed content with kicking the ball out of play rather than letting the Hawks’ tenacious O get their feet on the rock.

The situation did not improve for Pine Plains in the second half, although the Rhinebeck barrage let up a little. A Rhinebeck header sailed just over the crossbar at 33:57, but Rhinebeck’s Nick Hoynes knocked in a shot at 31:33 to make up for the miss and put the Hawks up 5-0. Rhinebeck pulled the onus off McClenahan in the second half and relied on more even ball distribution; head coach Justin Wisenthal sent in platoon players in the final 15 minutes. The Hawks would bury two more goals in the period, including a low dribbler from Eric Rodriguez at 19:02 and a shot from Ryan Euell with three minutes left on the clock.

“I think for our first game, we came out and played a quality match. Obviously, with a 7-0 victory, we did something right. I do still think we have a bunch of things to work on, to improve,” coach Wisenthal told the Observer, “We didn’t do a great job of finishing today. Although it’s 7-0, we pinged the ball off the post something like four different times.”

After the boys finished with the Bombers, the Rhinebeck varsity girls soccer team opened up their season by beating Pine Plains 6-1 on the same field,

There was high drama in the match – at least until halfway through the second half. After knocking in a goal at the end of the first half to tie things up, Rhinebeck’s Michelle Giampartone took the game into her own hands, flushing two goals and leading Rhinebeck’s late-scoring salvo. Christine Hatter, Rachel Tigges, and Megan Heller each chipped in a goal to help Purple to victory.

The Lady Hawks then fell to New Paltz, 3-2, in the second leg of the tournament Sept. 7. Hatter and Hutchins each scored, but the Lady Hawks gave up an own goal to seal their fate.

After the loss, Rhinebeck is now 1-1 on the season.