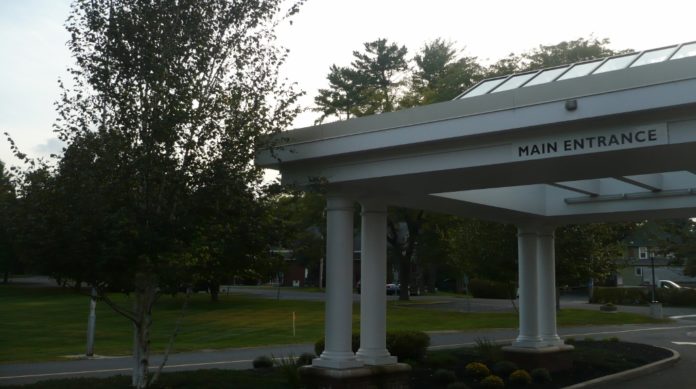 By Naomi LaChance and Sarah Imboden

In clear response to a large public outcry, the developers of Northern Dutchess Hospital’s expansion project will now keep almost all the green space in front of the complex.

Kirchhoff Medical Properties and Health Quest representatives ended weeks of speculation when they submitted redrawn plans to the Village of Rhinebeck Planning Board at its Oct. 15 meeting.

The proposed expansion had drawn fire from residents during three public hearings because a parking lot for the new three-story wing encroached heavily on the lawns abutting Route 9 and Montgomery Street.

Jeff Kane, from Kirchhoff, and Larry Boudreau, a landscape architect with The Chazen Companies, presented the revisions, which they said were done specifically to address residents’ concerns.

About 45 residents were at the meeting but did not speak because it was not a public hearing.

In the new plans, 85 percent of the green space in the front of the hospital is preserved and the parking lot originally proposed there has been moved behind the hospital.

The revised plans retain four fewer parking spaces — 102– than in earlier plans under review since August. But the amount of green space preserved has been bumped up, from 1.18 acres to 1.51 acres out of the existing 1.84 acres.

Landscape plantings have been “beefed up” in an attempt to screen the parking lot from passersby, although the specific number of trees to be cut down was not available.

Green space in other areas of the complex will also be lost, though Kane and Boudreau could not give details at the time.

In addition, a small parking lot will be added behind the Women’s View Health Annex, on Montgomery Street, and more parking will be added to existing lots at the northern end of the hospital complex near Orchard Street.

Planning board members questioned Kane and Boudreau about both new parking sites and said they would want neighbors to weigh in during the next public hearing, which will be set once the plans are reviewed.

Kane also said the hospital is now considering valet parking as a solution to help visitors utilize the faraway parking spaces. He said the option is expensive and many people will not choose to use it, but it could help the hospital use its parking more effectively.

Some visitor and handicap parking at the front of the building was maintained because Health Quest, which owns the hospital, believed it is important to patients, Kane said.

The planners also pushed for assurances from Health Quest representatives that they would give more thought to finding a place where employees can smoke or consider disciplinary action for employees who smoke on the sidewalks. Neighbors have complained that more employees are smoking on the sidewalks in apparent response to the new state law that prohibits smoking on hospital campuses.

Planning board chair David Miller said the village engineer would have to review the new expansion plans before the board could schedule a public hearing on the revisions. The board plans to discuss the application again at its meeting Nov. 5 at 7:15pm.

Meanwhile, the planning board faces a potential court challenge from a group of Rhinebeck homeowners unhappy with the environmental review process for the project.

Cate Long, the group’s spokesperson, told The Observer, “We believe that the Village Planning Board conducted the shortest and least detailed review of the hospital that they could. Although this is a $43 million project in the middle of an historic district filled with nationally landmarked homes, they did not feel it necessary to assess any of the visual dimensions of the project, among other things (this is a requirement of SEQR).”

At a Town Board meeting Oct. 9, the group had asked the town to consider suing the village over the SEQR issue.

In her statement, Long noted, “We hope that Health Quest and Rhinebeck Village Planning Board decide on their own to undertake a full environmental review as required by state law. If this happens, we will withdraw our Article 78 petition.”