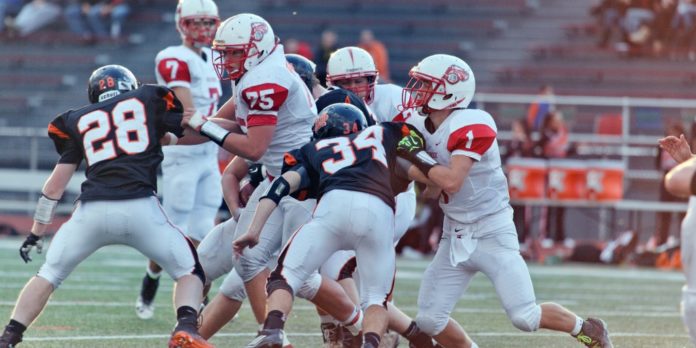 Surprisingly, it was Red Hook that got on the board first in their Nov. 2 showdown with top-seeded Marlboro in the Section 9, Class B football semifinals held at Dietz Stadium.

Unsurprisingly, the Raiders got on the board a lot less over all, losing to the Iron Dukes in the end 41-25.

After an anemic possession to open the game for either team, Red Hook looked like they might keep things close with the Iron Dukes. After a 35-yard run from Dan Acosta and a Luke Carlson completion to wide receiver Billy Harris, Dustin Ducey made it into the endzone for Red Hook’s first touchdown. Carlson converted the point after an attempt on foot, to put Red up 8-0.

And then came reality.

It took an unfazed Marlboro less than two minutes to force the ball into Red Hook territory and for Iron Duke Tanner Harshberger to take it 32 yards for a touchdown with 5:36 left in the first quarter. Red, however, held the lead when Marlboro failed on the two-point attempt. On the ensuing possession, the Raiders went three-and-out and gave Marlboro the rock on their own 46 yard line at 3:58; at 3:47, Marlboro’s Marsallis Faircloth — the Iron Duke’s big-time factorback — took it all the way to put the Dukes up 12-8, after another missed two-point attempt. Red Hook’s AJ Coolbaugh tallied a sack on the final play of the quarter.

The manageable lead got less manageable two minutes into the second quarter, when Marlboro’s Onorino Tamburri pulled down a touchdown to put the Dukes up 18-8; Marlboro then whiffed on yet another point-after attempt, this time a kick.

The Raiders couldn’t manage any offense until the final minutes of the second quarter, after another Marlboro touchdown and a five-minute Red Hook drive in which Ducey, Carlson, and Connor Boryk all touched the ball. There was some last-minute drama to it, too; after Boryk caught a pass and got it to the 18-yard line, the Raiders failed to convert on three plays. A false start on a fourth-down touchdown attempt sent Red back to the Marlboro 15, but a roughing-the-kicker call gave Red Hook a fresh set of downs, and Carlson kicked a field goal with :52 left in the half.

It was all grey clouds and no silver linings for Red Hook until the second half of the fourth quarter. After a disappointing Marlboro touchdown in the third quarter, in the course of which Red Hook defense almost scored a sack but instead surrendered a passing touchdown, Acosta returned a Marlboro kickoff to the Marlboro 21 yard line — and fumbled in a hefty gang tackle.

After Marlboro had built a 41-11 lead, they took the pedal off the floor and put Red Hook up against the B team. Red Hook scored two more touchdowns, one on a Carlson run at 3:11, and the other on a four-yard Ducey run with :55 left in the game.

“I’m so proud of them,” Red Hook varsity head coach John Kravic told The Observer after the game. “We improved, got better, fought the game right until the end here — against a team the caliber of Marlboro, that’s saying something. I’m just really grateful for the season. The kids played hard, got us to the end of the season, and they can have a memory of that for the rest of their lives.”

Staff - October 25, 2020
Arrests and charges stemming from New York State Police activity during the 24 hours ending at 7am.