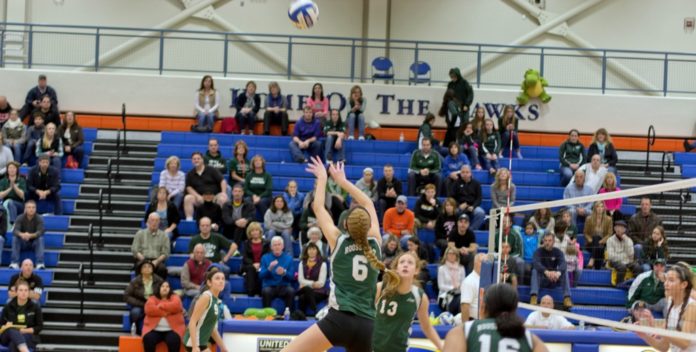 The magical ride that was the FDR High School girls’ volleyball team season finally came to an end Sunday afternoon.

With the loss, FDR ended a remarkable season for first-year head coach Sam Lowe. Lowe guided the Presidents to a 15-1 regular season record and appearances in both the MHAL and Class A championship games.

“I’m extremely proud of them; as a first-year coach, I couldn’t be more proud,” Lowe told The Observer. “It was one of the best squads I could have worked with for my first year.”

It was a championship match that featured the top two teams in Class A, as Cornwall and FDR were first and second seed, respectively, in the tournament.

In the first set, Cornwall dominated from the opening hit, jumping out to a 10-3 lead against FDR. The Dragons aggressively attacked the Presidents’ defense and won 25-10.

After an impressive showing against Saugerties High School in the semifinal on Friday night, FDR’s performance in the first set surprised even Lowe.

“The first set wasn’t FDR. I don’t know who that was; it was a totally different team,” she said.

The second set began with both teams exchanging points early on before Cornwall went on a 5-1 run to take a 12-7 lead. FDR battled its way back, however, and eventually the teams were tied at 21.

From there, both teams exchanged in a thrilling sequence of volleyball, battling for an advantage in a final series that saw seven ties and six lead changes. With the score tied 27-27, FDR finally pulled away, scoring the final two points of the set to win 29-27, tying the match at 1-1.

The third set picked right up from where the previous one ended. FDR led early 5-4, but Cornwall tied the game and grabbed the lead, 6-4. The Dragons did not relinquish the lead for the rest of the set, and despite a late push by the Presidents, won, 25-20.

The resiliency showcased by Cornwall in the third set was noticed by Lowe and the FDR team.

“There are a lot of teams out there that, when they lose points, they lose ambition. Cornwall doesn’t do that,” Lowe said. “They always stay high, and that was one of the biggest challenges that we faced today.”

With their back against the wall in the must-win fourth set, the Presidents jumped out to a 6-2 lead, and when Cornwall called a timeout midway through the set, FDR held a 13-6 advantage over the Dragons.

But once again, Cornwall showed its toughness, scoring 10 consecutive points out of the timeout to take a 16-13 lead. That run was too much for FDR to handle, and it lost the set 25-20.

After the game, Lowe told her players to keep their heads up and enjoy the experience of this season.

“[I told them] they should not take this game as an example of their playing skills,” Lowe said. “They are an amazing group of players.”