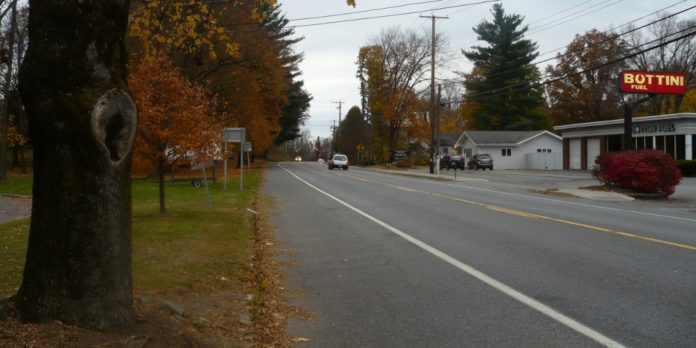 A new sidewalk for South Broadway could be in Red Hook’s future, but not everyone likes the idea.

According to the Red Hook Town Board, two grants are being sought to help fund a new sidewalk on the east side of South Broadway/Route 9 to Hardscrabble Plaza.

Though a sidewalk on the west side of the street allows pedestrians access to the length of the Route 9 business district as far as the Rokeby Road-Hannaford Drive intersection, the sidewalk on the east side ends at Town Hall.

At the Oct. 23 Town Board meeting, Councilman James Ross read a petition from Rosemary Zengen of the Save Our Town committee opposing the new sidewalk. The petition, signed by 30 residents and business owners, cited safety concerns for the elderly, the mentally disabled and students who could be in danger from vehicular traffic while crossing Route 9 and the driveways of businesses along the route.

In addition, the disruption of business on the east side of the street was also a concern. According to Zengen’s petition, a new sidewalk would “create additional work, cost and a loss of business for the landholders and businesses in the above-mentioned district.”

Zengen, who owns The Old Country Antique Shop on the east side of Route 9, then gave an impassioned plea to the board, naming other area business owners, including Triebel’s Garage, across Route 9 from her shop, who were also against the proposal.

Instead, she said, why not use the grants for a greater good?

She presented a letter from the United Methodist Church food pantry, and specified that the church was not involved with her sidewalk petition. The letter said that the church will have trouble paying their food bills by Jan. 2014 and needs donations.

“There are people that are starving in the town of Red Hook, that have no money to buy food,” Zengen said. “And we’re talking about thousands of dollars to go to concrete.”

Councilwoman Brenda Cagle replied that grant monies set aside for sidewalks cannot be used for feeding the hungry, or for any other purpose. She also explained that when the town first submitted the grant applications, many residents signed a petition in favor of the plan.

Citing plans in the works to develop the town’s new traditional neighborhood district for that area, Cagle said she expected more people to be living and working there in the future and that they should have full pedestrian access to businesses there.

Councilman Harry Colgan added, “The powers on high who I have spoken to in the state feel sidewalks on both sides of Route 9 are past due and it is time for us to move into this century. It’s a safety issue, really.”

Town Supervisor Sue Crane, who was sympathetic to the food pantry issue, also spoke in favor of the sidewalk plan, saying that the state and the county have counseled the board to address the safety issues of pedestrian access and that she believes that the southern area of the community needs to be fully connected to the village of Red Hook.

“We have no idea whether we will or will not receive the funding…but if we do…I would more than likely support it,” she said.

The grants would be from Dutchess County and the state Department of Transportation (DOT). The county grant is a Community Development Block Grant for $150,000; the state’s is a Transportation Enhancement Program application for $199,600.