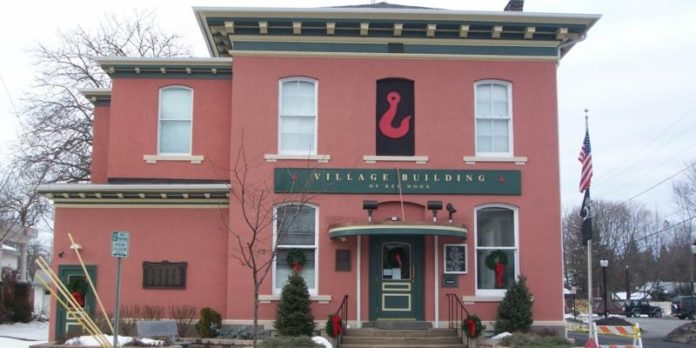 A six-month building moratorium in the village of Red Hook will apparently be lifted in early February when the village board expects to approve new zoning regulations.

The regulations, which widen the use of drive-thru windows beyond banks, incorporate last-minute input from both Dutchess County and representatives for CVS pharmacy, which is looking to buy the former IGA site.

According to a final version of the zoning document presented at a village board workshop Jan. 16, the new regulations will, among other things:

• Allow applications for a drive-thru window on lots larger than 1.5 acres, if the application contains a traffic and queuing study, the window is a minimum of 20 feet from the street and does not adversely impact traffic, and lighting and noise conform to set standards.

• Reduce new business parking lot sizes from 40 spaces to 20 and require 10 percent of the area to be landscaped with curbed planting islands.

• Increase lot coverage by buildings from a proposed 30 percent to 65 percent.

• Bar parking in a front or side yard, except in a side yard on the back side of a corner lot.

• Allow front yard parking on a corner lot as long as it is reasonably screened from public view.

• Maintain building or structure height maximum of 3 1/2 stories, which could be waved for church spires, antennas, civic buildings, and monuments.

The drive-thru window changes made by the board came partially from written suggestions by the CVS representatives, Cuddy and Feder, who formally presented the suggestions in their role as “land use counsel for GB Northeast 2, contract vendee” for the potential IGA purchase. The key change was the decrease in minimum distance from the street from 50 feet to 20 feet. CVS felt a minimum setback of 50 feet was inconsistent with a provision in the local law that new structures be located near the street.

The new zoning regulations, intended to update the village’s comprehensive plan, have been in the works since the board approved the moratorium on all site plan review in September.

With two public hearings and two workshops since December, the board was hoping to approve the changes and rescind the moratorium at their Jan.13 meeting. But they did not receive the county’s letter until that date, so they held another workshop on Jan 16 to further refine the changes.

Revisions on the regulations began in earnest at a Dec. 18 workshop, with help from attorney and zoning consultant Victoria Polidoro. The draft document was projected on a screen and the board members picked it apart line by line to agree on the wording.

The only member of the public to attend that hearing was Deborah Tiberio, whose family owns the IGA property. During the meeting, she pleaded with the board to allow a drive-thru so that CVS could purchase the property and move its current pharmacy there.

Talks between the village and CVS last summer appeared to indicate that CVS would consider the IGA property more favorably if a drive-thru was allowed.

The Jan. 13 public hearing on the changes was an anti-climax. Deborah Tiberio and town resident Arlene Harkins both spoke in favor of the new regulations. But in the end, Mayor Ed Blundell and the board had to postpone the vote.

The issue of front yard parking lead to a discussion at the Jan. 16 workshop on existing commercial buildings, like the vacant Griffin Insurance office on South Broadway, and whether a new business would need a variance for parking. Polidoro noted that the rules are confusing, and suggested the board rework them in the future.

The board scheduled another public hearing on the new zoning regulations for Feb. 10 at 7pm at the village hall. They expect to approve the new zoning law and rescind the moratorium at that meeting.