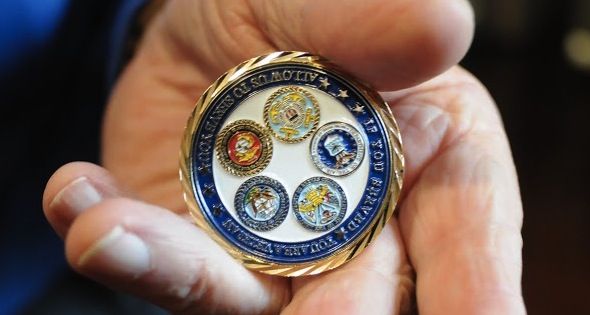 In a ceremony held in the lobby of the Thompson House, the nursing home facility on the Northern Dutchess Hospital campus, where she lives, Milliot seemed overwhelmed by the honor, suggesting that other people deserved the coin more than she, according to a Thompson House news release.

Gibson disagreed, stating, “Ruth Milliot is an extraordinary role model for the people of the Hudson Valley. Her service in the Marine Corps during World War II helped protect our cherished way of life.”

“So many of our women don’t see themselves as veterans or as deserving,” said Jane Weber, Women Veterans Program Manager at the Women’s Wellness Center in Albany, in the release. “Not only does the coin express thanks for their service, but it informs them of the services available. These are services they earned and what they deserve.”

Developed by the women’s health program leadership of the Veteran Integrated Service Network in upstate New York (or VISN 2), the newly minted challenge coin was launched in June to promote the many services women veterans may not know about, but which they are eligible to receive.

Born in Staten Island on Oct. 22, 1910, Milliot enlisted in the Marines in 1943 and was promoted to Staff Sergeant in 1944. She was stationed in Hawaii and the Philippines, where she kept track of the personnel records of wounded Marines. She was discharged in 1946. She and her husband, Doug, retired to Rhinebeck many years later.

“Women in the service did whatever work had to be done. They even flew the planes,” Milliot said in the news release. “The women Marines, they were a wonderful bunch.”