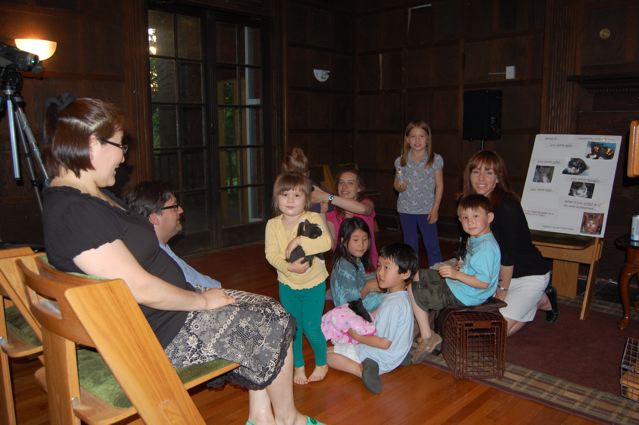 On Wednesday night, our first guest speaker for the new monthly Unification Theological Seminary (UTS) Speaker’s Forum at the Massena Mansion in Barrytown was Bobbi Jo Forte, a Red Hook resident, who rescues feral cats. She spoke on some unique trapping methods and rehabilitation and gave a demonstration on how she gets one hundred percent results when she goes out to rescue cats at the local farms, old garages and many other places around town. Her trick is to always catch the mother first. “Catch the mother and all the kittens will follow her. It’s better than tuna!,” she said.

Ms. Forte explained that when a large population of wild cats is allowed to grow—say on a local farm—it gets too big for all of them to survive. Many are born with health problems and would starve or die young if they weren’t rescued. She brings them back to her clinic at her home in Red Hook, and nurses them back to health and finds good homes for them.

Some parents brought their children to the talk. They may not have understood too much about rescuing feral cats, but the kittens Ms. Forte had on hand for the demonstration were a big hit with the children.

Ms. Forte, the founder of Animal Shelter Store, has been an animal rescuer since she was 22 years old when she started rescuing dogs, specifically German Shepherds. Fifteen years later her focus shifted to saving “feral” cats. “My love for animals and passion for rescuing is as strong as it was the day I started,” she says.

Before introducing the guest speaker, Henry Christopher, Community Relations Director for UTS gave a brief history about this former John Livingston estate, which was a Christian Brothers Catholic school from 1930-1972, and the Unification Church’s seminary from 1975 until two years ago, when they moved to New York City. The church says it is planning to open a four-year undergraduate college in the near future.

John Livingston built the original Massena Mansion in 1796. It was an exact copy of the Chateau of Beaumarchais in France and was named after one of Napoleon’s generals.
In 1860, John Aspinwall, a wealthy merchant from New York City purchased the estate. The Aspinwalls were related to the F.D.R. branch of the Roosevelt family.

Theodore Roosevelt stayed in the Mansion when he was 9-years-old in the summer of 1868 and began his life-long diary the day he arrived. He sent a number of letters to his nanny, Dora Watkins who returned to NYC after the first day at Barrytown, detailing his activities. They included drawings to illustrate his adventures collecting insects, birds, snakes and small mammals; riding his pony six miles each morning to Crugers Island; rowing on the Tivoli Bay up the Sawkill Creek to the water falls for picnic lunch with his mother, uncle and dog Jack; and being chased by “wild dogs” through Mr. Bard’s property. Copies of the letters lent by the Harvard Library were on display, along with historic photos of Mrs. Jane Aspinwall and the interior rooms of the mansion taken in the late 1800s, as well as a front and rear view of the original Massena house.

All the guests received a copy of the Barrytown Gazette from June, 2008 featuring a story on Theodore Roosevelt, a map of the 250-acre seminary with all its hiking trails, and a complementary copy of Rev. Sun Myung Moon’s autobiography.

The talk was filmed by John Vincent, a board member of the Egbert Benson Historical Society of Red Hook for the local TV station Panda.

Future forums will include talks on Islam, Palestinian/Israeli issues, the history of the Unification Church and a presentation by NY State Assemblyman Marc Molinaro.