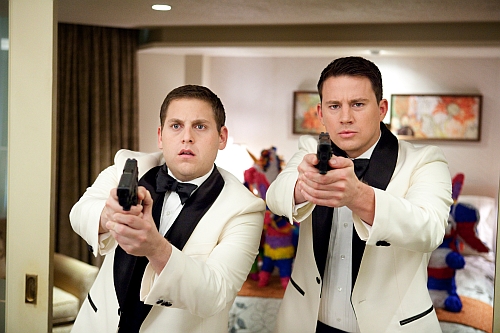 “21 Jump Street” is an affectionate satire on teenagers loosely based on the vintage television police drama. This version of “21 Jump Street” plays it for laughs. The film starts in 2005, when Schmidt (Jonah Hill) is a nerdy teenager who gets tongue-tied while asking a girl to the prom. He gets laughed at by Jenko (Channing Tatum), who is a jock. Fast-forward a few years, and they are both in the police academy. Jenko, still not a good student, barely graduates. Schmidt decides to help him, and the two become unlikely friends. However, both screw up and are quickly reassigned to 21 Jump Street, a division of cops who look young and go undercover in local high schools. Their mission is to take down a dealer who is supplying kids with a new kind of drug.

When they arrive at the high school, they are shocked to find teens are not as they remembered. Caring about the environment is cool and comic books are in fashion. Jenko blames the TV show “Glee” and Schmidt observes he went to high school in the wrong era. The humor lies in the fact that the two guys take their assignment overboard. Jenko takes AP chemistry and makes friends with the nerds. Schmidt gets to be in the school play. The police captain (Ice Cube) tells them he better not find them supplying alcohol to minors. They throw a party anyway.

Going back to high school gives Schmidt and Jenko an opportunity to relive their high school days. Schmidt becomes a better student. Jenko gets to ask a cute 18-year-old girl (Brie Larson) to the prom. They both get to switch their high school roles as Jenko becomes a nerd in AP chemistry and Schmidt gets to go to parties.

The film is directed by Phil Lord and Christopher Miller, who also directed the animated kid’s picture, “Cloudy with A Chance of Meatballs.” Members of the original TV cast make cameos, including Johnny Depp. The film has the mandatory car chase scenes and sight gags.

“21 Jump Street” is a sweeter film than I expected it to be, because it plays to the idea that these undercover cops can be friends, and that if you’re a tongue-tied nerd in high school, you might get a second chance to do it right.

Hill and Tatum have good chemistry, and the script, co-written by Hill, generally has a lot of fun with the premise and is affectionate about the 80’s TV show. That makes the film all the more likable.

Alec Horowitz is a freelance writer and film critic. He is a graduate of New Paltz University. He lives in the Hudson Valley.