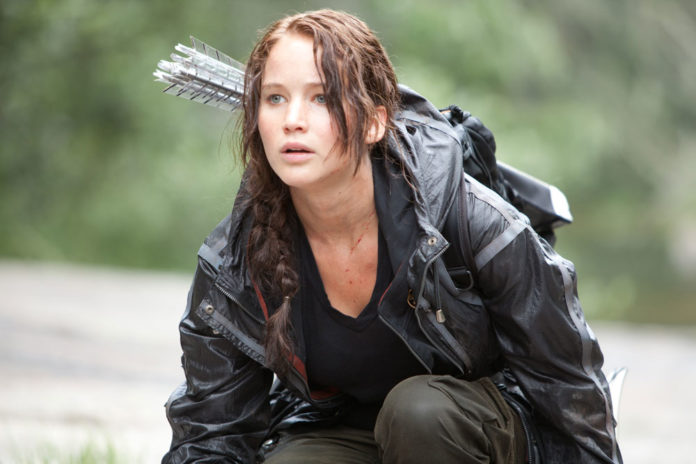 The heroine is a 16-year-old girl named Katniss (Jennifer Lawrence). She is a hunter and hangs out with the local boy Gale (Liam Hemsworth). Unfortunately, it’s that time of year again in this post-apocalyptic society, time for the annual Hunger Games, a government-mandated televised game show where kids kill each other. Younger sister Primrose (Willow Shields) is entered and Katniss volunteers to take her sister’s place.

Katniss and a boy named Petta (Josh Hutcherson) arrive on the train and are taken away to the Hunger Games. They meet their mentor, the bitter, drunken Haymitch (Woody Harrison), who won the games himself as a kid. Then they are dumped into a forest-like arena, facing a death battle with only one victor. “The Hunger Games” is a bloody sport, and Jennifer Lawrence delivers an intense performance, keeping the audience on the edge of their seats as she tries to survive all the traps, with only her bow and arrow.

“The Hunger Games” also has teenage romance and a dash of rebellion. But I have to warn people with kids that there is some disturbing material. There is violence and young people get killed. And everyone watching the games treats death like a sporting event. However, anyone who has read the book knows all this. What I cannot deny is that “The Hunger Games” is well made and Director Gary Ross does a good job of using a shaky camera to give the film an eerie feel.

“The Hunger Games” is a bit harsh, but for those who read dystopian novels, this is nothing new. In science fiction, the future can often be a bad place, but those who are new to the genre might be shocked by the premise. If you’re a teenager and a fan of the books, this film delivers. For anyone else, the idea of children killing children might not be your cup of tea.